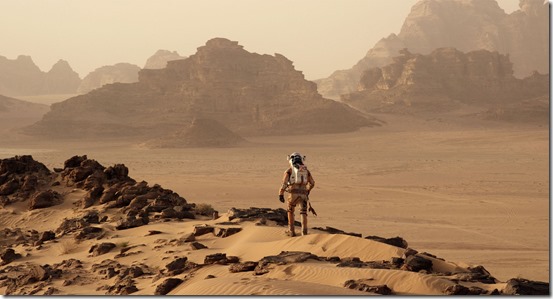 I just watched The Martian, and it lives up to the hype. Great movie. True, I love all movies and stories set on Mars. This is no exception.
I really liked the diversity in leading roles. There are lots of women and minorities in leadership and intelligent roles. Also, the movie pushes what's currently possible with science and space travel, which is what movies should do. That inspires us to reach for more.

However.
For as much as they pushed the limits of our current space technology, they dragged the boundaries of computer science back 20 years.

In the scene where Rich Purnell is figuring out the Earth gravity assist needed so Hermes can make the trip back to Mars, they show him sitting on the floor of a computer lab, with his laptop connected to a gigantic supercomputer.
Now, working for AGI I know these calculations are complex, but they do not require supercomputer time to complete. They only require a tool called Astrogator and an optimization tool like STK-Analyzer - that all run on the laptop alone. We humans are making great strides in software - so much so that trips to the Moon, Mars or even complex trajectories that include several gravity assists before you get to Pluto can be done on standard computers using standard commercial software.
Perhaps if Ridley Scott had depicted Rich Purnell performing those calculations on simply a laptop, it would have minimized the sense of grandeur he was going for in the film.
Just know that we are way beyond using supercomputers for orbital trajectories. We use supercomputers for galactic collisions now. We'll need that information for the next leg of humankind's journey through space.